« Last post by K-2SO on Today at 02:25:23 PM »
The Council will take it under advisement and we will be in touch with our decision.

« Last post by PhoenixJedi on Today at 01:38:25 PM »
So, I have read your new rules recently, and I would like to advertise something that's not a business, but could provide a help to what we do here. (I haven't been active on FX in a long time so..) I'd like to ask if its cool if I post a link to a lightsaber discord somewhere. It's run by community members, for community members. We even have people like Plecter Labs and Slothfurnace in it, and its a real boon to helping people get a saber up and running when you can live chat them.

So, is it possible to advertise something like this?
3

« Last post by OBI-WAN KENOBI on Yesterday at 09:47:34 PM »
Up for grabs is a very rare, high-end, and game accurate JK Sabers Rancor's Graveyard Edition The Force Unleashed Starkiller/Galen Marek lightsaber.  These sabers were a very limited run several years ago by German saber company JK Sabers, with the CF version at the time (CF 6 or 7, I believe) and were priced at $1600.00.   I managed to find a seller in Germany a while back selling one of these hilts empty and snagged it right away, the empty hilt alone ran me about $650.   It was then installed by a professional installer with all the latest goodies, Neo Pixel, CFX and of course smoothswing - perhaps the first of its kind with the latest tech.

The hilt has (its original) awesome, realistic and durable weathering.  It was upgraded with a clear quartz crystal for the exposed crystal chamber as well as a clear glass eye, both of which illuminate the same color as the blade.

Has a black 3D printed chassis built around the cool metal rods that run down the hilt, with small cutouts in the chassis that still make the rods visible.

In-hilt recharge, with a kill key and charger included, and with a 2 button set up (power and aux) placed in the control box.  The saber also has an OLED screen added to the chassis that has cool effects while the saber is on and also indicates the name of each font as you go through the menu. You can even play games on the screen via the games feature on the board's menu.

Saber has a Shtok neo pixel connector and a 28mm Smugglers Outpost speaker, which is one of the best speakers out there.   This has a whopping 45 sound fonts loaded on it - all smoothswing and most by Kyberphonic, Ksith and Madcow, as well as tons of others.  The cost of all the fonts added is nearly $200.

Sale includes a charger only, **does NOT include a neo pixel blade or blade plug** The blade used in the pics is from another saber. 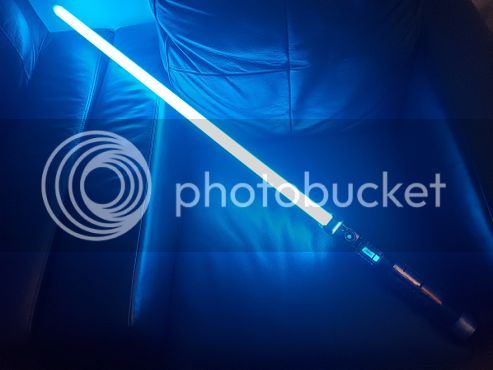 « Last post by shardan501 on Yesterday at 01:51:59 PM »
I for one don't mind the wait. I knew when I first started looking at lightsabers I was probably going to go with Vader's Vault for at least my first one. Then you folks announced you were doing this run and I had to get in on it.  It might be a minority opinion, but I would rather you took the time needed in order to meet the standard of quality you guys are known for, than to do a rush job simply for the sake of finishing the run.

« Last post by LUMINARA UNDULI on Yesterday at 12:30:35 PM »
Pictures will be posted when I have them to post.  Obviously no one has received their sabers, we would have made an announcement if they had been.  I am very sorry

. I get that people are frustrated.  Again, please take the refund if you are not wanting to wait any longer as we are doing everything we can to move this forward but also have staffing issues, supply chain issues, and other projects.  This particular saber is a very very involved install and we are still having some growing pains with it. The original design was made for We are working out the process issues we had with the first one and moving forward.  As mentioned in the previous post we had Megacon and then, unfortunately, had to roll right into NYCC.  We have a dearth of time right now.  We are juggling a million things. This project is definitely one of those projects on the current plate and we are working to get through it.  I know the length of time it has been.  I wish I could say they are all going to be done tomorrow, but they are not.  And likely while a couple may be done before the end of the year, the run is not going to be.  I wish I had better news but I just do not.  I am just going to continue to plug away and get them done as soon as we can.

Data Sheets / Re: How to turn off power saving mode

« Last post by QUI-GON JINN on Yesterday at 05:29:39 AM »
Outside of bypassing the soundboard, there is no way to deactivate that feature since it is embedded in the firmware.
8

Data Sheets / How to turn off power saving mode

« Last post by sabersmith123456 on October 17, 2021, 01:22:59 PM »
I have a Mace Windu lightsaber from a long time ago, I know its Force FX, just don't know the year. I like to keep it on my wall as a light but every time I leave it idleing It turns off after a minute or so, the switch stays on and it deactivates. So I know it's not a problem with batteries of pins since Ive replaced and checked both things. Im wondering If anyone knows how to turn off power saving mode?
9

This is the THIRD Kylo elite Fx saber in a row I have ordered and with all three having the same problem - I think I may be the problem?
Unit is assembled, brand new energizer ultimate batteries placed in the hilt, power
On switch activated and it give a pitiful “pew”.

No lights, no sounds other than a single “pew”.

What am I doin wrong?